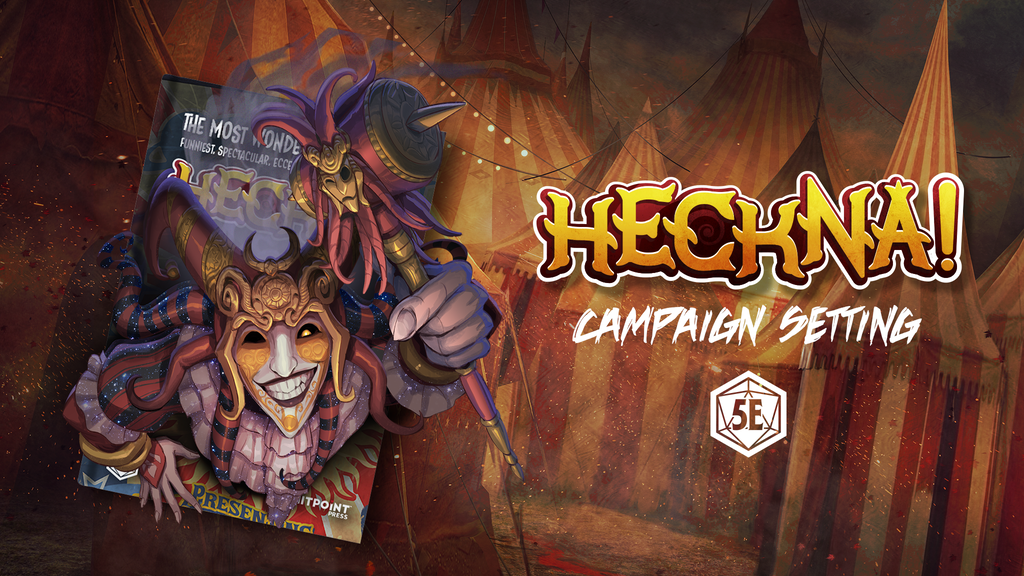 Will you see through the glitzy and glamorous charade or fall prey to Heckna’s everlasting torment?

Latest Updates from Our Project:

We’re in the final stretch!

We have just a few more announcements before curtains on the campaign.

We’ve had a lot of interest in making the STL files available for our minis and we’re happy to announce that they’re now available as an add-on and in an all-new digital tier! Add them to your pledge for $30 or back for the Deluxe Digital tier (Deluxe PDF + STL files for minis) for $50!

Some backers were requesting this so we made sure to produce high enough res versions of all the Heckna Masks! Protect yourself and those around you with four unique designs with masks based on Heckna’s moods!  Here's what they will look like when you get them.

With the last-minute additions here is what the final list of what to expect with the box sets will be!


Join us on Discord!

As the campaign wraps up tomorrow at 2pm EST, join the team and other backers in our Discord server! Watch the final minutes and celebrate with us!

GM Screens and posters and schnozlings, oh my! The highly anticipated stretch goal has been unlocked!

What did you unlock? GM screens, Schnozling Familiars, poster upgrades and more!

The manufacturers have just sent this tasty preview on how the popcorn dice are going to look! Don't you just want to eat them up?!

There are so many stories to tell about Heckna and the Revelia. This final stretch goal will allow us to team up with Gail Simone (Clean Room, Birds of Prey, Deadpool, Wonder Woman) to bring those stories to life!

We're also working with Gail Simone on a Humblewood comic that you can check out here: https://thedeckofmany.com/collections/comics

Want all the minis we've produced for this Kickstarter campaign? Get all 8 sets + a Schnozling familiar for only $240 (Save $20). Comes with the Deluxe PDF. Does not include any sets developed after this campaign.

The Deck of Stories and NPC Cards

A brand new storytelling tool in the DM's arsenal.

The Deck of Stories is a collection of interesting and captivating game hooks for you to use in your home game. The cards work together to make unique story arcs perfect for anyone trying to run a One-shot or write the next part of their campaign. Also available are their NPC Cards, a collection of Pre-generated beautifully illustrated characters for you to use in your home game. Each NPC has a handful of traits that help define the character, yet still keep their background vague enough for them to be cast in any role. They could be a Noble, a Bartender, a Bandit. You name it!

If you're looking for a little bardic inspiration in your next game, check out the Deck of Stories Here.

Our colleagues over at Guildhouse Games just launched their first campaign!

Varia is a new style of collectible card game that pits you against your opponent in 1v1 combat. In this fast-paced game, there are no minions to protect you or creature summons to hide behind. Instead, you raise the shield. You cast the spell. You swing for the win with your weapon of choice. If you want to win a game of Varia, you are going to have to do the fighting yourself.

Thank you so much for all of your support and enthusiasm for the campaign so far! Buckle up, this is a long one!

What did you unlock? More minis!

New minis are now available as an add-on! We’ve got four new unique sets for you to choose from:

Simply add $30 per set you’d like to receive to your pledge! You’ll be able to choose your sets in the post-campaign survey.

The GM screen is within sight! Once we pass the 500k milestone, GM screen, character sheets and new magic items will unlock, along with more stuff we've added! Here's a short list of everything that becomes available:

As an upgrade to the box sets, we'll be including a poster of Heckna casting Vicious Mockery! He does this by taunting the players all around the carnival through posters of himself.

With the unlock of the "Are We the Baddies" supplement we came up with the idea of letting players have a schnozling as a familiar in the game! We just did some printing tests and are excited to confirm that we will be offering a lifesize 1:1 grey schnozling familiar that people can paint!

At 700K we're teaming up with Mint Potion to bring you 10 Heckna! themed tracks to bring an additional level of immersion with your Heckna! games. These tracks will be around 10 minutes long each and will be included in all tiers for all backers.

Mint Potion is a studio known for their soundtracks on such amazing games like Shovel Knight, Shantae, and the OK K.O. tv series!


For those Revellers who want it all. Bask in Heckna's eternal glory with the Cosmic Collection.

This tier includes 1 of every item included in this campaign. With a value of over $600 USD this is likely a deal you'll not want to miss!


When unlocked the following will be included at no additional cost

200 monsters & NPCs + exclusive archetypes, rules, and playable species for your campaign, by the most awarded French RPG studio. This campaign ends in 3 days so be sure to check it out before it's over!

Red Opera, 5E Campaign and Setting in a City Where Warlocks Reign Eternal

The Red Opera: Last Days of The Warlock is an extensive, player driven campaign designed for 5th edition, drawing inspriartion from the DiA-morteheavy metal album of the same name, centered upon the oft-overlooked and much-misunderstood class: Warlocks. All are welcome in the Shadelands--an all-new realm where our story unfolds. For anyone in the Shadelands, be they adventurers, noblemen, or thieves can strike a temporary bargain with one of its many Patrons.

Two toned, mirror-like polish, with stunning inclusions; these dice can create a different color and effect depending on your perspective.  Every 7 piece set comes packaged in our signature glass potion bottle, perfect for display and adorned with a hand stamped wax seal.

We've passed another milestone! You know what that means, more stretch goals!

Get ready to cause more mischief, mayhem and monkey business with the new supplement!

What did you unlock? Adventure + Warlock sub-class supplement!

Don’t want to be the hero? Play in Heckna’s world as one of his minions! This supplement is included in the Hardcover book and PDFs.


We've got more monsters which means you get more options for minis! With this unlock you get to choose from 4 more unique sets of minis!

Goodie Two Shoes - Set of 5 NPCs that range from ally to neutral, they're not going to kill you, but they might not be your best friends.

Petshop - Heckna's pets are here to play! His two most favorite abominations are yours to now cuddle and feed rubes to! Myrmidion, Snout and their spawn are in this set.

Props a Plenty! - This was a fan request! We'll make a set of 7 props from ticket booths to popcorn stands. Make the battlefield riddled with carnival goodness!

Get everything you need to get your campaign started once the campaign reaches 500k! Heckna character sheets, DM screen and new magic items will make GMing and character creation a breeze, with all sorts of new campaign specific magic items to choose from.

Come and find adventure in other parts of the carnival! These side quests are great for one-shots or to plug into your Heckna game! Sideshow Adventures are a series of side quests that will explore other new and secret parts of The Revelia!

Unleash the horde! These 30 masterfully sculpted miniatures are based on the goblins, hobgoblins, orcs, and ogres that were featured in Ultimate Bestiary: Revenge of the Horde. These miniatures are perfect for fantasy roleplaying games like D&D and Pathfinder, as well as miniature wargames!

Make tracking conditions and effects in your RPG games simple and beautiful. They've created condition trackers in the form of ringed coins that you can use to mark what conditions are affecting your characters or monsters. Place the miniatures inside the precisely machined inset (made to fit standard 1" circular miniature bases), or hang the rings on your larger miniatures to mark them. The 14 ring set makes tracking status effects during combat simple and elegant, and eliminates having to use plastic bands or bottle cap rings.

We can’t contain our excitement at reaching another milestone!


What did you unlock? 10 new animated spell cards!

All 10 Heckna spells will be animated! The animated reference card pack will be included for free with the box sets! It is also available as an add-on for $10.

What's next? “Are We The Baddies?” Adventure + Warlock subclass supplement!

Unlocking at 300k, this supplement introduces a whole new way to play in Heckna’s world- as his minions!

Included in this supplement are:

More Stretch Goals to be announced in the $300K Update!

Watch as Jordan and the cast of Let's Roll Characters bring Dr. Willa Wheelerbum, a halfling, elf-cultured fighter urchin--and unicycler extraordinaire (in her own mind), to life! How does she end up at The Revelia?

Check out the video! There are a lot of great Heckna tidbits and fun Revelia facts included (also Heckna's voice reveal?)!

Projects We Love: Monsters of Murka: Restaurants and Retail!

Restaurants and Retail is the first full-scale expansion for the United States pop-culture parody campaign setting: Monsters Of Murka (a gold best-seller on DriveThruRPG)!

Designed for 5e DnD, Restaurants and Retail includes new subclasses for every class, over 20 horrifying monsters, over a hundred weapons, spells, and magic items, and a host of tools to enhance play.